Tor, Its Advocates and Child Pornography

Hacktivism has grown from an outlet for outraged millennials to a political force due to Assange, Snowden and others. While the subculture enjoys support from diverse ideologues hacktivism is distinctly libertarian and even anarchist, hence the coinage cyberlibertarianism. Similar to laissez fair cultists hacktivists believe an inherent goodness only one that is possessed by the internet and its innovators instead of the free market.
Apart from imagined goodness hacktivism fosters a strong persecution complex, people are expected to believe that rape charges against Julian Assange are a plot to render him to gitmo. Handmaidens to hacktivism like Peter Ludlow expect his readers to accept his fatuous fantasy that Aaron Swartz helped save us all from an Orwellian state by cowardly throwing himself a necktie party.

The aforementioned attributes contribute to a void of self-honesty and inability to take criticism that combined with a hatred of all government authority explains rage directed at federal actions against TOR. That marks a low point in the hacktivist subculture since the crackdown was directed chiefly against child pornography, yet its presented with as a blow to privacy, freedom and so on with barely any mention of child pornography.

Extremists usually ignore whatever human rights violations stand in the way of their causes, thats why the internet is polluted with people arguing that NATO is the chief cause of Afghan civilian death with a straight face. TOR fans who remained silent about the service hosting child pornography either ignored child pornography or downplayed it, the guardian mentioned it once. Richi Jennings produced a shrieking article insisting that "TOR attacked by NSA/FBI: Feds curb freedom over child porn." There's nothing new about the FBI methods employed, they do not have greater power so its false to claim that they have somehow "curbed freedom." In fact the FBI is experiencing an all time record weakness.

Jacob Applebaum is the face and leader of TOR which makes it hard for TOR fans since Jacob supports child pornography and believes that child pornography should be legal. On twitter Applebaum endorsed pro-child pornography spew written by Rick Falkvinge which features standards tropes of the pedophile movement that have become cliches. The article could pass as a NAMBLA newsletter: fear mongering about free speech and talk of sultry barely legals who should be free to sexually experiment etc. the whole thing was masterfully refuted here. Rick's article featured pathetic arguments with little merit, but Jacob believed them because he liked it.

Jacob described it as the "article that I will cite from now on" and that he has "argued these points many times and I have literally had people spit in my face for saying it. So kudos for writing it up." Which reveals his narcissism, he believes his hurt feelings caused by reactions to his support for child pornography matter unlike the voices of victims. 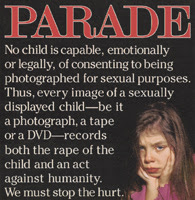 In the comments of Rick's article Jacob agrees with him and parrots Falkvinge's strawman article of equating child pornography to videos of murders which is nonsense. Rapes committed by child pornographers are done so for the expressed purposes of viewing; there is not a single example of murder being committed to do record and profit from that recording. They deliberately ignore why child porn is illegal while a murder victim is in no way violated by a recording of his or her death the rape of chilren is magnified tens times over by having it recorded. The victim will spend his or her entire life haunted by the fact that pieces of their souls are traded by strangers violating them repeatedly. Applebaum and others ranting about the TOR crackdown fear monger about 'privacy' yet they do not extend that right to victims of child pornography who are raped again and again by having images and recordings of their suffering enjoyed by deviants.

Recordings and images of child rape are produced for people who want to possess such material obviously without the risk of incarceration the market would explode. Jacob and Rick have vocally argued in favor of child pornography growth, only a complete simpleton would fail to realize what would happen if they were to get their way. What would happen if the law enforcement methods opposed by Jacob and Rick came to an end? It would allow people who produce child rape material to easily evade the authorities; tacit support for people who produce child rape images.

Applebaum has been described as "cyberspace's most dangerous man" or an "activist." He is none of those things. Jacob Applebaum is a facilitator of child pornography, an online pimp who runs a criminal enterprise posing as a privacy tool. Yet Tor defenders fail to acknowledge that child pornography openly exists on the service founded by a man and that its believes that child rape image possession should be legal thus making children's bodies into commodities; a sort of cyber slavery.

Since people in democratic nations enjoy privacy rights there is no reason other than paranoia or illegal activity to use Tor especially since the service is supposedly excruciatingly slow. There are countless privacy tools to relieve fears of people who check under the bed for NSA ninjas come to spy on their cat memes; so we do not face a choice of Tor or the highway. If we entertain hyperbole about Snowden's revelations affirming that we live in a closing society (which is as ridiculous as proclaiming that this little fella proves that we live in middle earth) then that means that critics have a duty to work for change through the democratic system not hang on crime drenched darknet boards.

Tor defenders argue that the serviced is used by dissidents in oppressive dictatorships echoing similar narratives like cyberutopian delusions that facebook toppled Mubarak. Even if we accept such claims as fact the FBI and NSA have not prevented people in other countries from using the service. There is little evidence to suggest that TOR is used by dissidents in Iran or PRC or similar despotisms and its easy for those regimes to shut off access to Tor. The service's development director Karen Reilly dismissed such arguments by openly admitting that "we are not a democracy promotion tool."

Hactivisim is a toxic ideology as it has no place for protection of the  innocent. Their concept of freedom is the right to impose one's will on the vulnerable, that is the mindset behind the abominably ludicrous idea that anti-child porn laws are censorship. Cyberlibertarianism has become seen as alternative to the status quo, any viewpoint with a predatory distortion of liberty and a lack of protection for children's rights is illegitimate and will only lead to ruin and stagnation. The internet has given voice to many evils but the idea of "privacy for me but not child pornography victims teeheehee" is particularly monstrous.
Posted by Unknown at 12:24 AM